With WTCR Race of China a week away, the winner of the last WTCR – FIA World Touring Car Cup presented by OSCARO counter, Tiago Monteiro, reveals his keenness to share a podium with Jams Hunt, talks about his pre-race routine and explains what the future holds when he eventually hangs up his helmet.

Imagine if an extra venue was added to the WTCR / OSCARO schedule and the decision was down to you, what track would you go for?
“I would love to do Bathurst because I’ve never driven there, but Watkins Glen is an amazing track and big fun so I’m going for Watkins Glen.”

Which two drivers would join you on your ultimate fantasy podium, from any category, any era?
“I’m not going to mention any WTCR names because I’ve shared many podiums with drivers like Gabriele Tarquini, Yvan Muller, many others and I have so many friends in WTCR. So, I’ll go for Benoît Tréluyer and James Hunt. Benoît was my first team-mate in single-seaters and he’s a very good friend, I really appreciate him as a person and he’s a brilliant driver. It’s not like I’m crazy about James Hunt but you had to like his attitude and his approach to motorsport. It’s different to a lot of people and if you want to have a fun podium you either have Tom Coronel or James Hunt.”

Is there a pre-race routine you always follow?
“I try not to get too much into superstitious stuff, I’m not very superstitious and I don’t want to get stuck with this kind of ritual and one day forget about it and stress about it and not focus on what is important. But I kind of have a routine. I try to focus a little bit on my own, warm up a bit, listen to some music and try to have some shut-eye for 10 or 15 minutes.”

Why do you run with number 18 on your KCMG Honda Civic Type R TCR?
“The number 18 has been quite an important number for me, even when I was a kid before I was dreaming about being a race car driver. And because I was number 18 when I was in Formula One, I asked to keep it when I moved to WTCC. I’ve been using my trademark for many years around the number 18 and I was very happy that Eurosport Events and François Ribeiro went in that direction and gave numbers more importance, more significance.”

And when you finally stop driving how will you keep busy?
“I will be involved in racing somehow. I am managing 14 drivers at the moment and I have a young guns development and management company, which is growing every year. This has been my life for 22 or 23 years and you don’t just want to throw that away by no longer working in racing.” 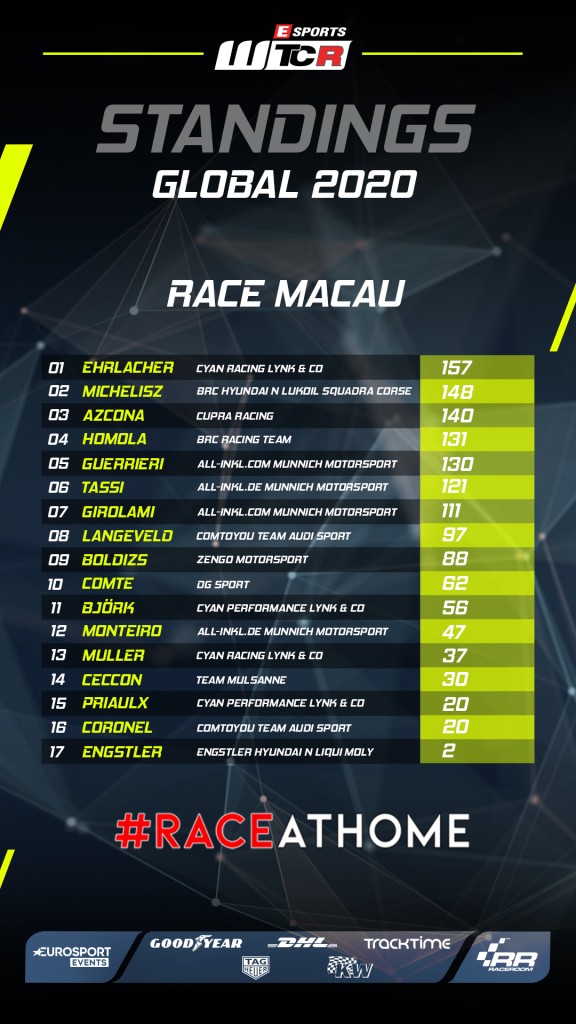